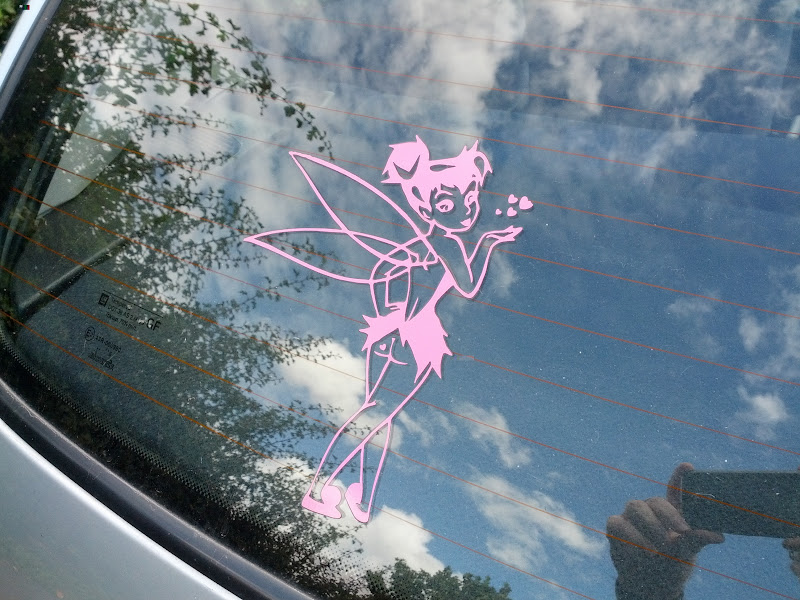 That naughty fairy Tinkerbell is out and about again. 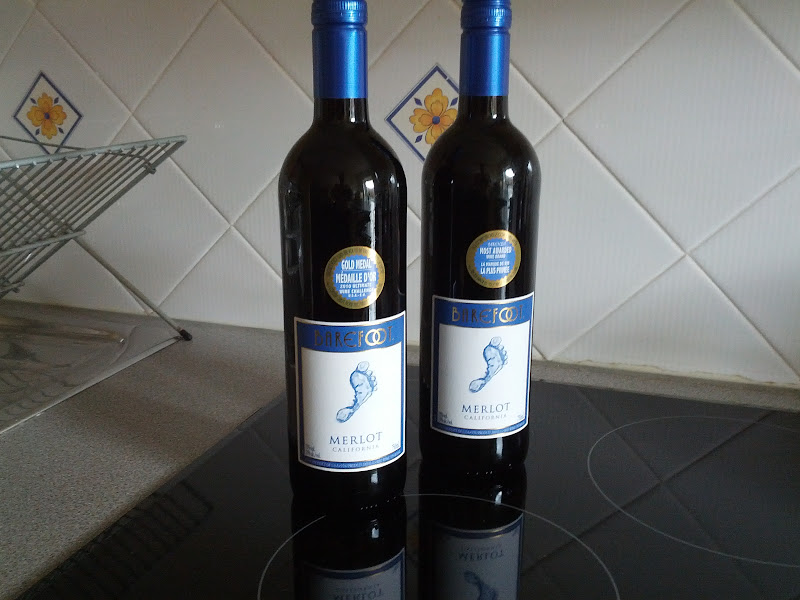 Reward for a job well done

Just some times, life can bring unexpected rewards from the most unexpected of places.

So an unusual day. For a start it involved the alarm clock going off at 5:00am.

Ok, I wasn’t expecting this kind of a Friday.

So after getting sorted out with paper work, routs and stuff, it was time to head out into the world. So for me, my first stop was going to be to pick up a part down at Almondsbury near Bristol. A bit disappointing as when I got there, the locker was bare. So not a good start. Time to ring up the desk and see if the part’s whereabouts can be determined. This involves being on hold for a quite a while. So this locker of mine is in the car park of the Rugby grounds. And a ways off in the middle of the car park is a group of fellas chatting. Then one of them strips off down to his socks & kegs. WTF? Then one of the other fellas breaks out a pair of black high heel shoes and an outfit for him to put on. Oh and a big blonde wig and sun glasses. Don’t believe me? How about a 14 second video?

So after finding out that the part is already on site, I head off to go and pretend that I know what I’m doing. I get to site and set about tinkering away on my first call. This involves trying to get a humungous laser printer working in one of the site’s admin offices. Now while I’m playing the game of hunt the wire, the lovely young lady in the office is sorting through a box of donated goodies that people have contributed as prizes for the kid’s “Lucky Dip” game. The fourth item in and she starts laughing. Lots 😀 Now I’m no expert. I’m not a parent. But even I think that this may be a slightly inappropriate prize for a child… 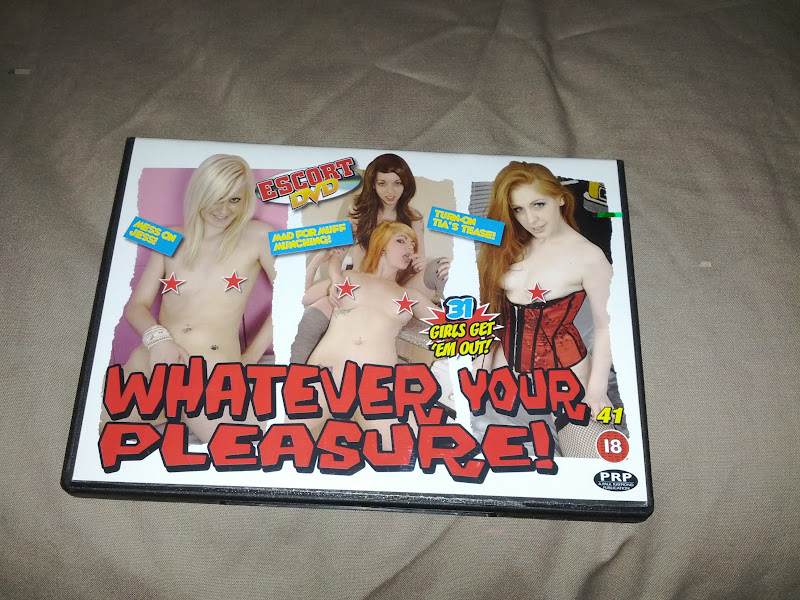 Oh, and pretend to be an engineer and fix stuff 😀

Tuesday was a fun day. Instead of going to various customer’s sites, I went here instead… 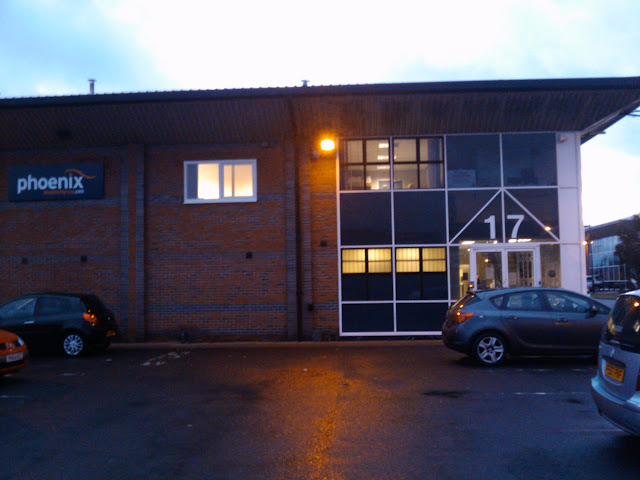 And there I met the call planners… 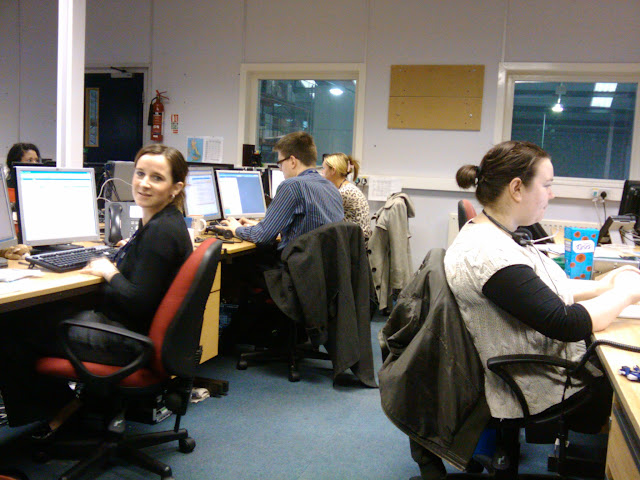 And the Technical Support fellas… 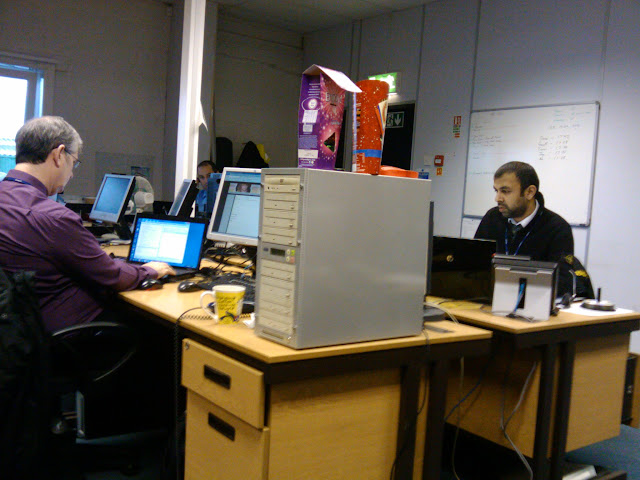 From a working standpoint it was nice to see how the work comes in to the desk, and how it’s processed, even before it gets to an engineer’s PDA. Being remote, the perception is that the PDA makes a noise and there’s your job. I had no idea how clunky and unintuitive the system is that the desk have to deal with. So it fills you in on the bigger picture of the whole process, and hopefully I’ll be able to adjust my working methods to try and make the process easier all round. It was certainly helpful for me, as at least I now know how my input is reflected in the system.

But from a social standpoint it was an excellent giggle. It’s always good to put faces to voices and emails. So with that in mind I made a last minuet detour for vital supplies, arrived at the office, submitted the office to a 10 mega watt grin through the security glass and they still let me in. And this was before they knew I came bearing sweeties. So a month late, but a Merry Christmas & a Happy New Year greetings were issued to all. This in turn did get me awarded with an excellent mug of tea. And as every one knows, engineers are powered by tea. I also said “Hi!” to the lady that deals with all my paper work. She wasn’t too best pleased with me. But that’s understandable considering she just had to process all my holiday requests that had come in. Hopefully the box of chockys will soften the blow. [Note to self – don’t forget the lady that pays your overtime, and sorts out your holidays]

So an excellent day. I even managed to get my sweaty little mits on a soldering iron. Just got to find a home for that in the tool box. That reminds me, I’d better buy some solder as well.

Today has been excellent.

Now I’m a lucky man. As part of my job, I get given a car to use. Over the years there has been a variety of cars and vans. But with the exception of hire cars, they have always been hand me downs. So it has always been a case of “Here’s the keys, try not to break it”. So typically I’ll spend a couple of weeks discovering the problems and creating a niggle list. Eventually I’ll get it repaired. In the last case I had a car that had passed it’s lease, so had to go to an independent non-mains dealer. I took it in with a snag list as long as my arm and didn’t see the car for over 4 weeks.

So this time I was genuinely excited, as I had been asked to pick the colour of my new company car. RESULT!

So today I had to await delivery of my new car.

Fresh off the line with only 102 miles on the clock I have an Astra sportage 1.7 diesel SE spec. 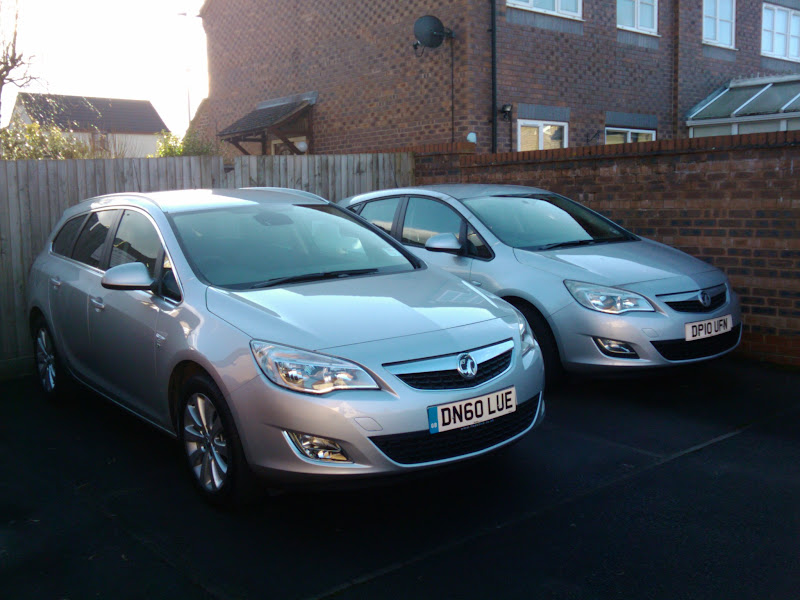 I seriously thought I it was a miss-type and it was going to be a bottom the range ES spec. But I was wrong.

That new car smell. Love it 🙂

For those of you wondering why your seeing double, the one of the left is the new company car. The one on the right was the hire car I had. An Astra 1.6 petrol bottom of the range job. I now have a lot more buttons to play with. A much nicer interior. And alloy wheels. Result!

Got sent out to a retail site today. Had to rebuild one of the computers, so that left me with a bit of time to take in the environment I was in while the PC did the automated reload thing. So up on one of the shelves were some DVDs. 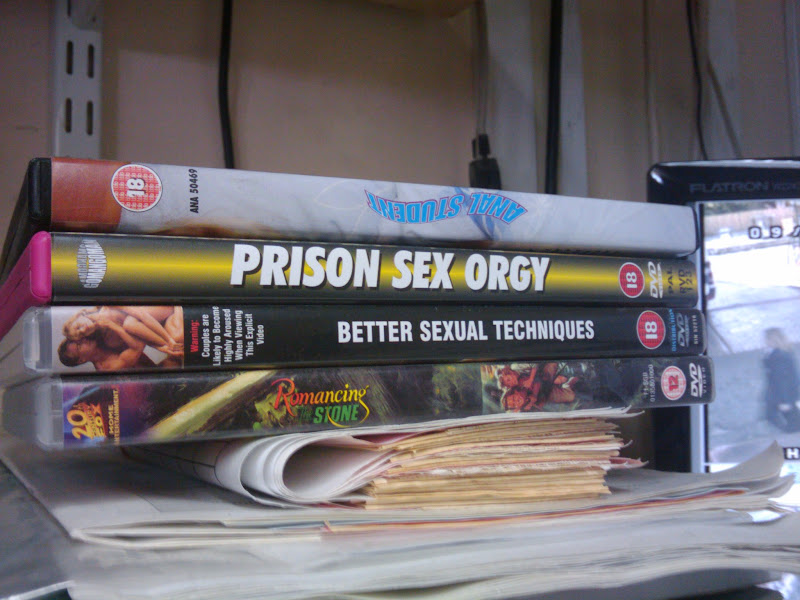 Now what the hell is “Romancing The Stone” doing in amoungst that lot?

That reminds me. I found a photo I took a couple of weeks ago. Who one earth goes on holiday with a pink wheel barrow? 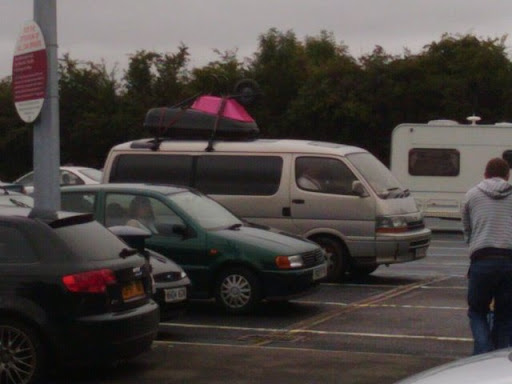 Ok, I was on the last service station of the M4 in Wales, so I suppose I really shouldn’t be that surprised.

I’m Shattered! I’m finally on the last day of my 10 in a row. My thinking feels so fuzzy. I think I’ve driven over 1,500 miles and probably done 68ish hours in the last 10 days.

So looking forward to a day of tomorrow. Definitely having a lie in.

It’s that time I dread. The long stretch of the rota. Monday had been a great day. Nice and quiet, but Tuesday was determined to make up for lost ground. The jobs through the day had been nice and straight forward, but as I was on standby I get to do the out of hours software clear down for one of the company’s retail customers. In this case it was a retail site in Cardiff. So I got to the site for a couple of minuets before 8:00pm and went and said hello to the manager. Unfortunatly they were having a stock take at the same time, so that split there consentration some what. So it wasn’t untill gone 9:15pm when Icould finally make a start on clearing down the tills. It was a couple of minutes later when i found that till 2 had a problem. After trying to get the thing to load to the default screen I opted for the old favorite of “Turn it off and on again”. This didn’t work. The till then took half an hour to try and re-index every last file it had. After half an hour it failed and rebooted it’s self. Again it tried to redo the indexes. another half an hour passed and again it failed and rebooted.

Not a happy bunny at this point. The help desks have closed. And Tech Support closed up shop ages ago. So with no one to ask for advice, I needed to come up with a plan. Sod it, lets reload the till. This process involves getting a floppy disk in to the back office PC. Which has been very neatly installed in to a rack cabinet. And to make life interesting the back of the PC faces out and the cables have been neatly tie wrapped in with zero slack on them. So the only method to get the floppy disk in is to sit on your arse and reach under the shelf the PC is on and try and get the disk into the slot. What ever you do, do not turn off the PC.

So the disk goes in ok, and I run the utility needed to make a rebuild disk. Back to till 2 and give it a whirl, nothing. It ignores the floppy drive. Reboot and try again. Nothing. Drat! Back to the office with a fresh floppy disk. Fumble blindly for the floppy drive, run the utility and back to the till. Nope, it reads the disk but it doesn’t like it. Back to the office again, grope around in the cabinet and make another disk. Yay! This one works. Reload the till. Patiently wait for the till to get all the data off till one. Once that’s finished, I can then run the clear down on it. Talk about a long winded method. With till two all fixed up, I clear down till 1 and run the end of day. Hooray! I’m finally finished. With the various forms filled in and exchanged it’s 23:09 when I finally leave the site. So it’s gone midnight by the time I get back home. Thank Betsy for the 11 hour rule.

Oh, the million pound note? Yes, one of the members of staff gave it to me “As payment for my hard work”. 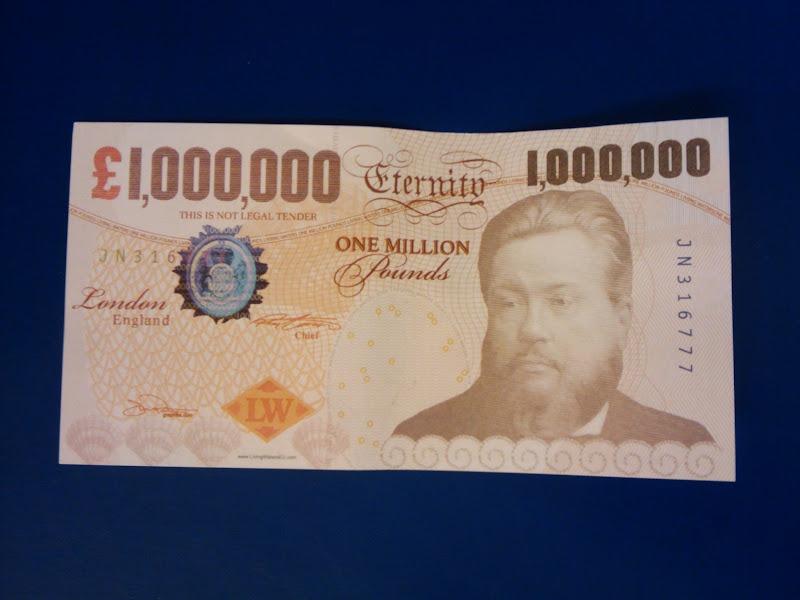 Apparently they had some religious guy in handing them out. Doing the good work of Jesus by tempting the sinner with spoof money. And the back of note went on to talk about sin, hell and redemption. I was some what amused to find that I have sinned quite a bit.

Finally the end of the working week. Yippee! So a hassle free day of work and bright sunshine. All kinds of good. Frag fest was a giggle, although I still can’t aim straight. An early night as the company car is due a major service. I’m so glad I don’t have to run my own car. It’s bloody expensive.