Tuesday was a good day. Nice and sunny. Work was quite local. Some of the sights I saw stopped me in my tracks.

So the first contestant was a retail site in Cheltenham. It was the one I’d been out to the day before and had a power supply got “POP” at me. So suitably armed with a replacement power cable and new PC, I swapped over the bits and was very happy to see that the screen came on and the printer had a power light. YAY! It’s alive! So after tidying up and doing the all the forms and things I went back top the parts depot and dropped off the used parts. Seeing as it was mid day, some lunch was in order.

So after that is was back to Cheltenham. A retail customer in one of the arcades was having some troubles with their reports printer, in that they were getting a smear down the middle of the page. I thought it was worth taking a look at. And initially I was chuffed to find some debris in the back of the printer. But with that cleared out, it still wasn’t working. Drat. Round one to the printer. I admitted defeat and got a replacement ordered for them. As i was walking back through  the arcade, something in the window of Lush caught my eye. i couldn’t quite believe what I had seen. I stopped turned on my heal, and yes I really did see what I thought I’d saw. 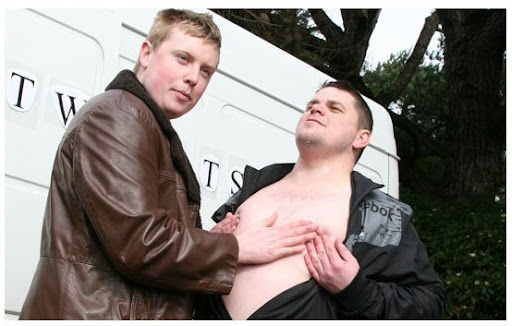 I was so stunned I forgot to take a photo. Seriously, there is no caption. No explanation. That photo above taken from the web site is all there is. I suppose you have to go in to the store and ask. I would have loved to have spent some time just watching Joe Public. To see how many people walked by with out seeing and those that saw it what their facial expression was. No time for that. I needed to go back to my first site. Apparently the bar code scanner wasn’t working. Sure enough the plug had come of the of the PC. Plugged the scanner back in and rebooted the PC. Result! That’s working.

Off to Huntley to try and sort out a network problem at a retail site out there. After a while I had found that there was naff all wrong with the hub. Although I did chuckle when I found a USB plug stuck in a RJ45 socket on a hub that isn’t being used by our kit. The problem came down the on board network card on till two. So another call I don’t get to fix, but at least the problem has been identified. So with that all arranged it was back home to fire off the end of day emails and try and find out what happened to a part for a job I did back in March. I think I figured it out.

So a relaxed evening in front of the computer playing WOW. Simple pleasures.