Going home to where you grew up is an odd thing. Also finding yourself without any WEB access is also a pain in the arse. But on the bright (ish) side, Vodafone had got an EDGE signal near where Mum & Dad live. A shame the HTC phone I own is still utterly shit in it’s reliability. But never mind. So Tuesday afternoon was spent catching up with Mum & Dad. Or at least up to the point where they both fell asleep at 7:30pm. I figured the best thing I could do was let them get some rest.

Now Wednesday was an adventure. Me & Dad drove 200 miles north up to Thornaby on Tees near Middlesbrough. It’s been years since me & Dad have spent any significant length of time together. It was really nice to drive & chat. Initially i thought it was going to be a dull trip, as Dad asked that I stop so he could get a paper as soon as we left the house. I had a premonition of a driving for nearly 4 hours while he read the paper. But it wasn’t the case. He didn’t read it till we got home in the evening. So it was really nice driving along. I hadn’t driven the A1 for years. I think it was last year that I went a visited a friend near Huntingdon, but other than that I hadn’t been up that road in over 7 years. May be 8. the sat-nav was having fun. It looks like nearly every roundabout has been removed. So I was getting prompts to take exits that no longer existed. At one point, the road deviated off so much that the sat-nav thought I was doing 70mph through a field. But anyway. It was a nice day out. Stopped off at a Little Chef on the way home and had a breakfast for a late lunch early tea kind of thing.

As for Thursday. Well, for years I’ve been promising Mum that I would get around to clearing the junk out of my room. So I finally made a start on it. It was like going through your childhood. The crap I horded. There was old school reports. Scrap books I’d made. I found my GCSE certificates. For some odd reason I had the blue prints to Grandad’s shop in Peterborough. Old magazines. Loads of junk. So much so that I didn’t make it to the tip on time. Although by the look of the cue of people turning round, I think they had closed a little early. So rather than return all the crap to Mum & Dad’s house, I left it in the back of the car and mentally made a note to dispose of it at the tip in Gloucester the next day. So after loading the car to the roof (probably due to the fact that I had found my old Atari STE and games. That’s definitely coming home with me), I said good bye to Mum & Dad and headed home. I got back very late at night. The stuff I was keeping was off loaded. I was too tired to find homes for it then. So it wasn’t long before I crawled off to my own bed. I had missed it.

So Friday kicked off with a trip straight down the trip. When the hell did throwing away rubbish become so difficult? It’s like attending an interview with an aptitude test. Which one of the 28 different bins do I use? And woe betide anyone that puts the wrong thing in the wrong bin! But I was sneaky. I managed to dispose of a stack of ST Format magazines in to the cardboard only skip. HA! Take that bin guardians! So back home to get scrubbed up and then I took a bimble into Cardiff. It’s nice to walk about the place and not be working. So I only wanted to have a better look around St Davids. So stopped in John Lewis for lunch. Had a look in the Apple store. Found a Plan Lazy outlet. All kinds of good. Oh yes. Saw a 6 foot plus trannie in John Lewis. Walked very well in high heels. I haven’t got a photo of that. So here’s a photo of a Lego Clone trooped from John Lewis instead… 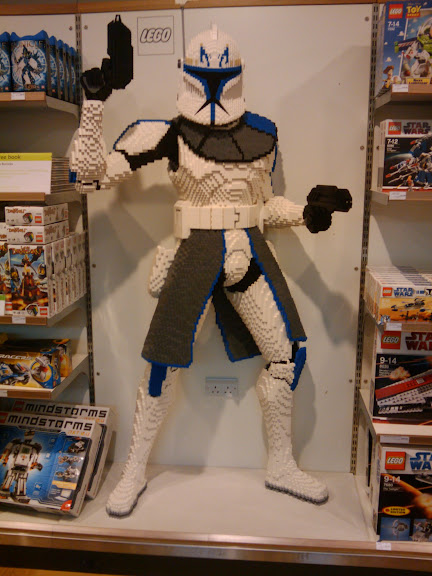 I eventually went home. I did the desent thing and finaly went shopping and got some food and drink back in the house. Being Friday it can only mean one thing. Frag Fest! A damm good giggle. For a start it was the return of Mode Seven to the servers. So a lot of banter and giggleing was had.

I’ve got two more days left before I have to return to work. I’d better make something of them.