An unusual day. On the bright side, it was my weekend off. But I did have one errand to do for work, which is get the company car serviced. So due to odd way the car has been sorted out as a temporary measure until my new employer can sort out a new fleet of cars, I’ve got a hire car that has come from Enterprise in a round about way. Now the lovely people of Enterprise have a contract with Kwik Fit, so it was to Kwik Fit I headed. Iwas told it was going to be about 3 hours. So rather than spend 3 hours sat on not particularly comfortable sofas, I decided to go for a walk.

I’ve only been into Gloucester Quays once, and that was while working. So it was nice to have a slow bimble around the place. There are all sorts of shops in there. There is one that sells professional quality cook wear. A couple of cafes. A music shop. The Cadbury’s Chocolate factory shop. And loads of clothing out lets. One in particular seemed to delight in seemingly massive discounts. Apparently this dress started off life at £485, then it went to £30, but could be yours for £20. 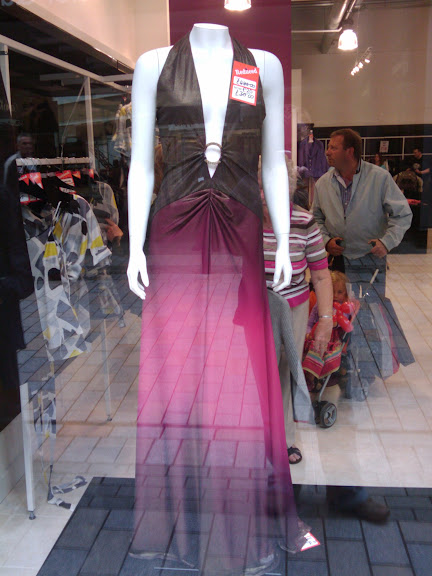 Now that kind of discount seemed to good to be true. When faced with a bargain like that, I found my self wondering how a dress could be worth nearly five hundred pounds in the first place. And how the hell was the store making any profit?

I had probably inadvertantly stepped in to another dimention. Because a couple of minuets later I saw this. 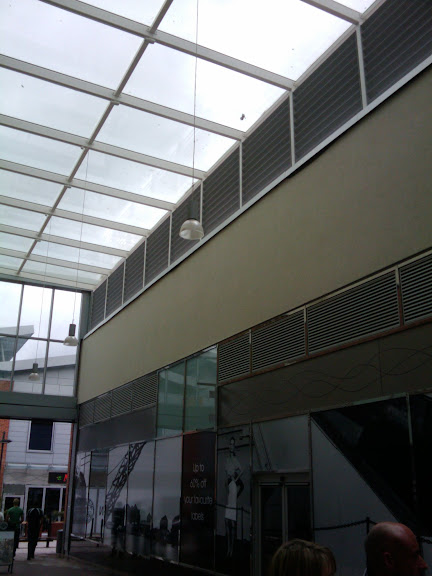 “But what am I looking at?” I can hear you cry. Well maybe this will make things a little clearer. 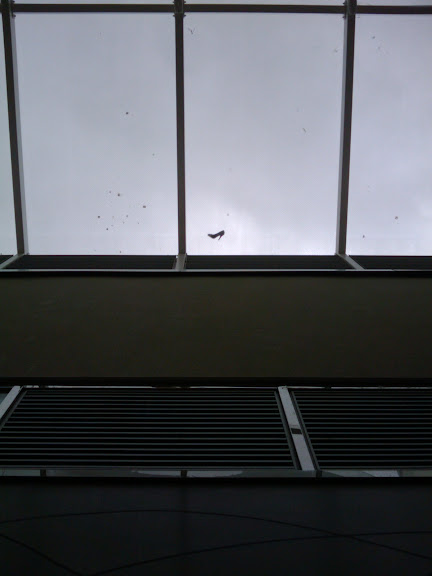 That’s right, a lady’s high heel shoe. How the hell did it get all the way up there. If some one threw it then it must have been one hell of a throw. The roof isn’t overlooked, so I wonder what the hell has been going on. Was Cinderella having a hot air balloon ride over Gloucester? Was there some kind of 007 style roof top chase? I was staring skywards contemplating this. I then realised that I had drawn other people’s attention. So they started looking up, then one or two started pointing. This drew other peoples attention. So what had started out as an unregarded shoe, was now becoming the centre of attention. Feeling happy with myself, I continued to bimble on.

It wasn’t long untill I stumbled across a bizzar little shop. Well with this stod out side wouldn’t you want to go in? 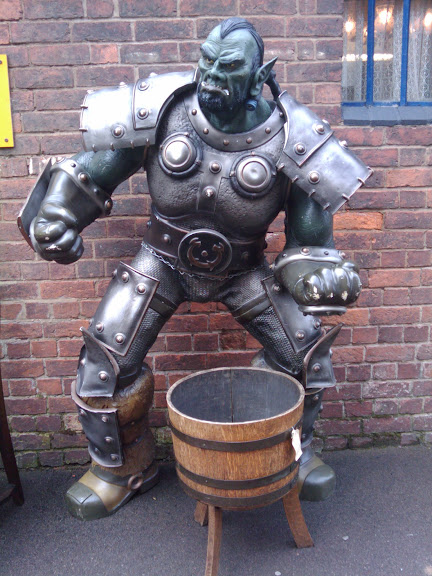 I mean what kind of antique shop has an Orc out the front? I had to take a look inside. There was all kinds of things. Furniture, clocks, clothing, military stuff. Even a trumpet. Very nearly tempted to spend the £120 for it, but thankfully thought better of it. It was certainly a shop of curiosities.

Well time passed and I went to collect my company car. My suspicions were raised when I realised that the car was exactly where I had left it. My forebodings were proved right when the man from Kwik Fit explained that they need to seek authorisation from enterprise before carrying out a major service. and unfortunately they couldn’t get hold of the person listed on the system. It was a mobile number and it was going straight to answer phone. What a waist of time. I had other things I wanted to be doing. I was going to see my friends down in Hampshire and it would have been nice to have spent more time with them. Sod it. If the car goes pop it’s not going to be my fault.

So after that fiasco I headed home, grabbed a quick bite to eat and headed off to Hampshire to go and see my friends. It was good to catch up with them and chat. A very chilled evening ensued with much good company and entertainment.