A good sign that winter is over is when you have to use the air con in the car. OK, so wearing a black shirt won’t help, and the scenic does have a huge window screen. But I did find that it was getting beyond pleasantly warm.

So the last of the 12 hour days. And the added bonus of being on holiday next week. A bit of an odd day. Kinda mostly half victories. So the first job was a retail site in Ross-On-Wye. One of the cash draws had gone to bits. Thankfully the nuts and bolts were still inside. So it was easy enough to put back together. But unfortunately it wouldn’t fire afterwards. So an replacement was ordered and as a favor for the site, I swapped over the cash draws between tills 1 & 3 as they wanted till 1 working more than the other two tills on site. So a happier customer, just not an actual fix.

The next call that came in was for a hospitality site in Cardiff. Their PC had gone down and taken their tills with it. So a priority job. Luckily there was a spare PC in the Cardiff depot. So down to Cardiff to get the PC, and from there to site. As I got there I realised that the staff were happily using the tills. Had I got the right place? The manager came over and said “hi” and explained what hadn’t been written in the log. Yes it’s true that the PC wouldn’t start. But apparently they just kept persistently restarting it till it eventually got the hint and booted up. But the BIOS battery was beyond hope, so the date had reverted back to September 1999. As the staff don’t have access to change the date and time on the system they started session in the past. Some one’s going to have fun sorting the data out. So I gave the manager some options. I could cannibalize the the replacement PC or the BIOS battery and fit it to the PC, but that would take down his tills while I swapped them over. About 5 to 8 minuets. Or alternatively I could just set the date and time and have the call turned into an arranged visit for tomorrow morning before they open to the public. The manager went for the latter. So I set the date and time and then let the call planners know the change in the calls status. Another half victory.

So on to the next call. Still in Cardiff but down at the docks. Another hospitality site with a faulty till. The part had already been shipped to site. And the staff had shown some very good initiative buy plugging the new till in. So all I had to do when i got there was boot it up and change the settings to make it the right till number and all that kind of thing. Reboot, reload and test. Quick and simple and easy. How every job should be. If the site had only just packed away the old till and field in all the paper work for me. On second thoughts that would put me out of a job.

Not a bad way to end the week. I’ve now got a week off work. So a little time to myself and then over to see my family for a few days. Back in time for frag fest. Should be a good giggle, but families are tricky things. You can never tell what’s going to happen.

Oh, forgot to mention. When I stopped for a quick bit of lunch I saw this mutant bike. 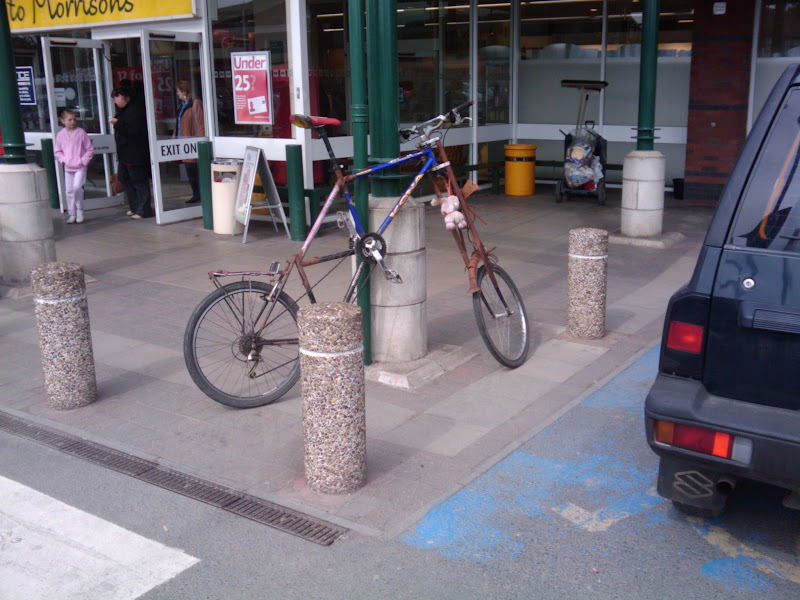