Blimey, I’ve not written anything since the beginning of February. But there has been so much exciting stuff! Well not really. Work is work and life is life. But that’s a massive generalization. More than likely is that truth of that I am very out of practice when it comes to writing. So rather than bore you all to death with what the last few months have held, lets take a little peak at the recent past.

Oh, while I remember. If you’ve been sent here by my boss, it’s not as exciting as what you may think it is in your mind. It’s just me rambling on. Like I do when you have to give me call. Hello by the way 🙂

So where was I? Oh yes, pontificating.

Right, so lets skip getting my ankle hurt by a swinging traffic cone. Gloss hurriedly over the steel lined door to the face incident. Lets definitely leave the out the after effects of Bernard Mathew’s chicken. And smoothly come up to speed with last weekend.

So, one of my close friend’s Mum was going to be celebrating her birthday. And because I’m a good boy, I will not disclose the lady’s age. Anyway, a surprise party was being arranged. So some holiday was booked off and plans were hatched. And as is always the way of plans, hastily rearranged at the last moments. In my case, the early start on the Friday to go and spend some time with my friends and their children was put back as the only time I could go in and show the nurse my legs was in the afternoon. Poor nurse. On the bright side it’s apparently minor ligament damage and I was prescribed some anti-inflammatory tablets. It was also the most exciting pair of pants the nurse had ever seen (at least for that week). So after that was all done & dusted it was off to Dorset.

I got there as the sun was setting. And as so as not to give the game away, I parked the car up the road in the village. The reason for this level of skullduggery is because Mumsie lives just over the road from my friends house. And a big silver Astra estate would kind of raise suspicions. So with the car out of the was I walked to my friends house. Thankfully I wasn’t spotted. Which is a good trick considering I have the least stealthy hair color. Anyway, it was a nice evening of catching up, and the kids were sound asleep upstairs. Also, to have a fighting chance of keeping the imminent party a secret, neither of the children had been told that I would be arriving. So that was going to be a surprise for the morning.

It’s official. Young children get up way too early. For the curious of you, that will be 7:00am. So I quietly packed away the sleeping bag, got dressed and went and said hello. There is something very good for the soul being greeted with such sincerity from small children. So the hours of the day then flew by. The kid’s BBC web site has an astonishing amount of stuff on it. Mostly learning disguised as games. So there was the bug that taught language. So Mandarin came through because “the bug had a helmet”. I also later discovered that little girls are un-naturally attracted to the color pink. On the of the coloring in exercises, where the bugs tell you the Spanish or Chinese for the color, basically involved painting everything pink. Then declaring that you need to make the page blank again, so that they can then fill everything in pink again. OK.

So with time ticking on, there was also a couple of cakes to be decorated. So the kiddies were let loose and for some odd reason, I was helping as well. I know! Me a supervising adult in the close proximity of icing. And cake for that matter. Anyway, eventually the cakes were decorated purely on the children’s say so. This did result in there probably being a cake under the mountain of sprinkles. But an accidental shake & blow sorted things out. I tell you, the ninja like cunning required for parenthood is phenomenal.

Now time was short. Two kids to shower & dress. The baby to sort out. Secret phone calls to make. Two stressed adults to get washed & dressed. And then me. I had the easy job. Simply sneak out of the house with my overnight bag, the baby buggy and the two cakes. And then rendezvous with them all for the big surprise at the venue. Turned out not to be that simple. First up there was the challenge of finding a box to put the cakes in. Eventually the kid’s art draws were salvaged. Then there was the buggy. Well it came out of the back of their car out. Folding it out was simple enough. So with my bag over my shoulder, one boxed cake on the buggy seat, the other in my free hand. I attempted to get out of there without being seen by Mumsie. Some how managed it. Then there was the challenge of loading the car.

It’s at this point that I would strongly advise you never to attempt this kind of thing in front of the village green. There tends to be an audience.

So the bag & the cakes went in easy enough. But the buggy turned out to be a challenge. If I’d been better prepared, I’d have emptied the boot of my work kit. So the first challenge was figuring out how the hell top fold the buggy flat again. After lots of struggling and muffled swearing, I found two tiny release handles. Happy days. But it doesn’t quite fit. I’m aware that my actions are providing entertainment for my on lookers. I stop what I’m doing with the buggy half hanging out of the car. There is a gentle shaking of heads. Right, back to work. More twisting and swearing, the buggy is a bit further in, but the boot won’t close. I again look over. This gets a wobbling of the palms to indicate that it’s progressing. Close. But not quite there. Eventually I remember that the rear wheels come off. RESULT. I close the boot of the car and there is a round of applause. Isn’t that nice. So help might have been better.

It was probably the most careful drive I’ve ever undertaken into Dorchester. But thankfully I got the cargo there unscathed. I’d also taken so much time that the birthday girl had already arrived. Drat! With a complete absence of subtly & stealth the cakes were transported to the main table. A few moments later I met up with Mumsie to wish her happy birthday. It was then that she told me of her drive in to the party. Apparently they had only just set off when a little girl turned to her Grandmother and said “You don’t know that Uncle Jim is here do you?”. You’ve got to laff 🙂

So that was the weekend. Today, work found me something new. After tinkering with a till up in a petrol station in Blackwood, it was off to Newport to play with the wireless network of a certain budget chain of supermarkets. This involved a ladder. So in the interest of not sustaining any more injurys at work, there were two of us. As it turned out, the kit was hiding in the suspended ceiling. The other surprise was the proper sized loft ladder, 2 pigeon steps, steal gantry walk way and low beams. Not what I was expecting. Some what daunting as the roof space got lower and lower as you went further along the gantry. And as Sod’s law would have it, when you have a choice of two, it’s always the other one. Now the other AP did require a step ladder. Unfortunately the site’s ladder wasn’t quite tall enough. Thankfully Andy is over 6″ tall. So he could stand on the last step and then reach in for the AP. After a little bit of prodding & poking, it was found that it was plugged into the wrong socket. Happy days. So good to meat up and chat with another engineer. But as soon as the paper work was out of the way it was off to Cardiff to fix a cash draw in the city center. Just a soon as I found where the parts locker was. Strewth the docks are rough.  Parts all sorted it was into the city. Where, after a short walk, I found nothing wrong. The joys on intermittent faults. Just in case a, a quick blast of WD40 was used. Can never be too sure.

So there you have it. The rambeling of the missing link between human & orangatang.

What’s that? You want a picture?

Well OK. Here’s a Toyota Yaris that I nearly didn’t see in a car park in Wantage. 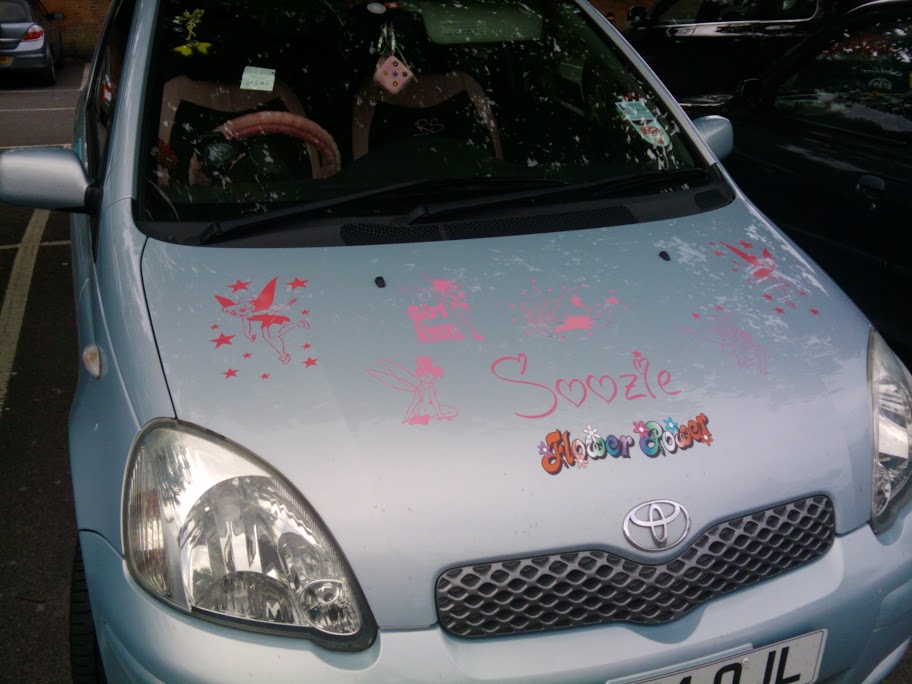 Now you probably have a mental image of the driver. I’ll save you some time. Your wrong.

And yes, one of the Tinkerbell fairy’s has lost her cloths.