There is a convention that been hosted at the Telford International Center by the name of CoxCon for the last few years. Back in 2017, I went along for my first time. I had wanted to go along before back in 2016, but felt a little uneasy. I figuring at the time that I wasn’t the intended demographic. Turning 40 will do that to you. But I did attend in 2017 and I had a great time. I got to meet Mr Jesse Cox and tell him “thank you” for the content. And I got to meet and befriend some amazing people. Twelve months later and I was eager to go back. I had purchased my ticket months before. I’d had a hotel room booked for myself as far back as January. But this year I was also going to help out. The ever amazing Wendy from Muse Games had asked if I would like to help out on the booth. And the awesome folks from The Cosplay Forge had also asked if I would like to help out too. So I figured I’d split my time over the weekend across both booths. And by a very happy coincidence, both booths were side by side. Happy Days!

Friday 20th July 2018 – Operation get all your stuff for the weekend up to Telford.

So it was time to find all my Cosplay stuff. I figured I’d take along nearly everything. Hoping to illustrate that with a little time and practice that great things can be achieved. And I needed my Steam Punk attire. So with the van loaded up I headed up to Telford to help both teams get set up. 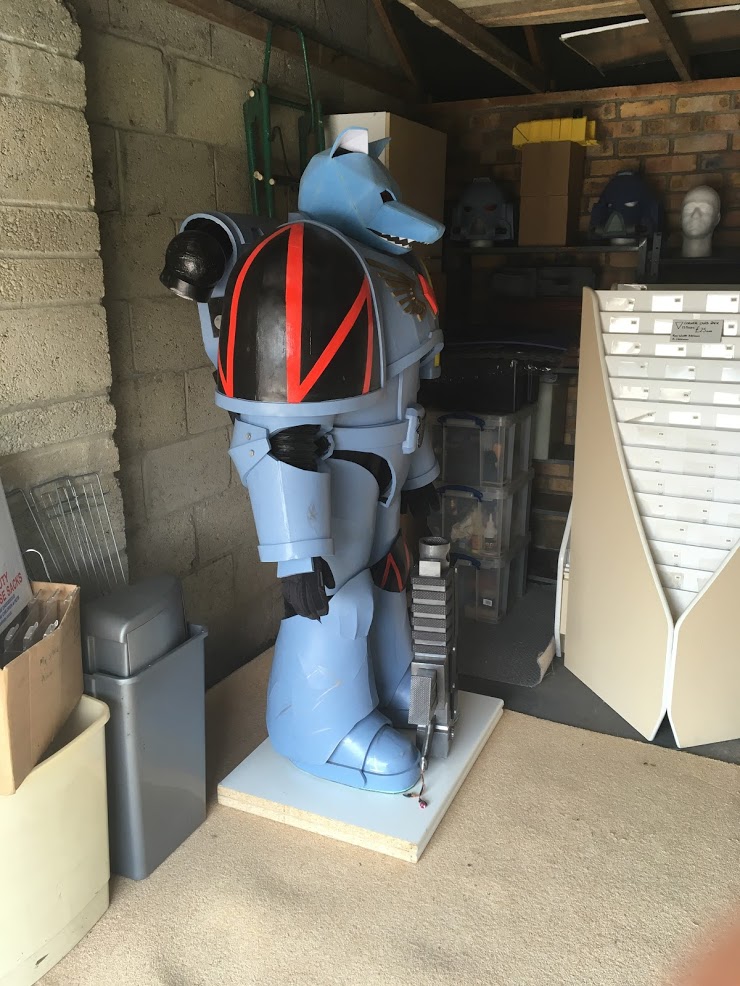 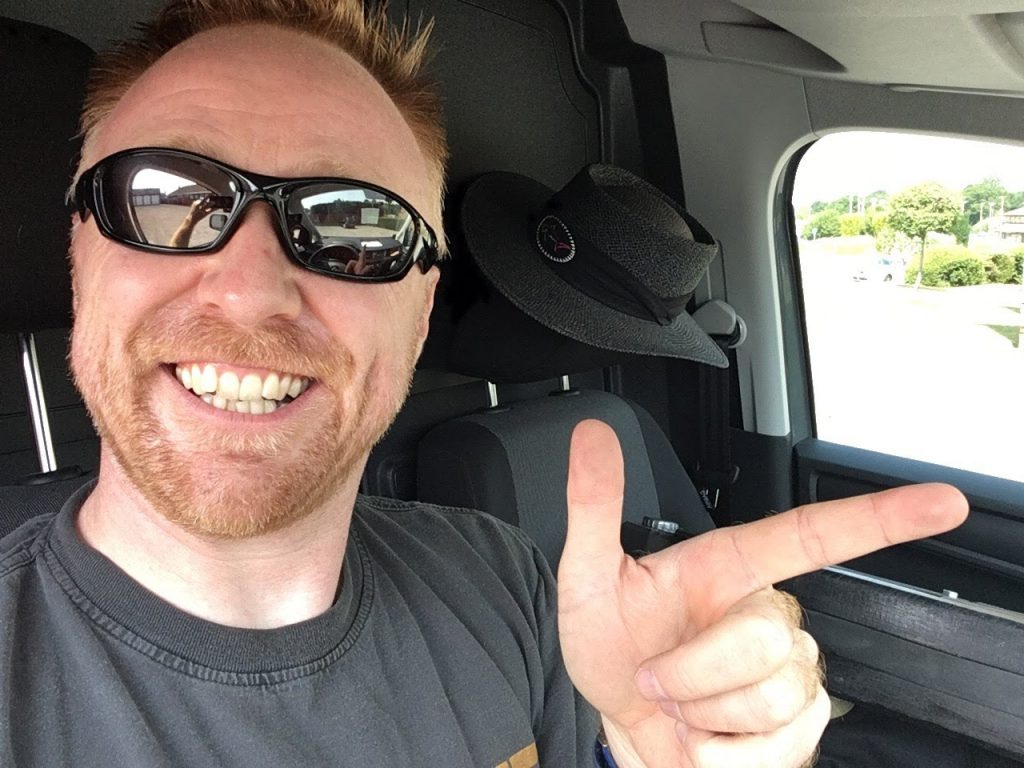 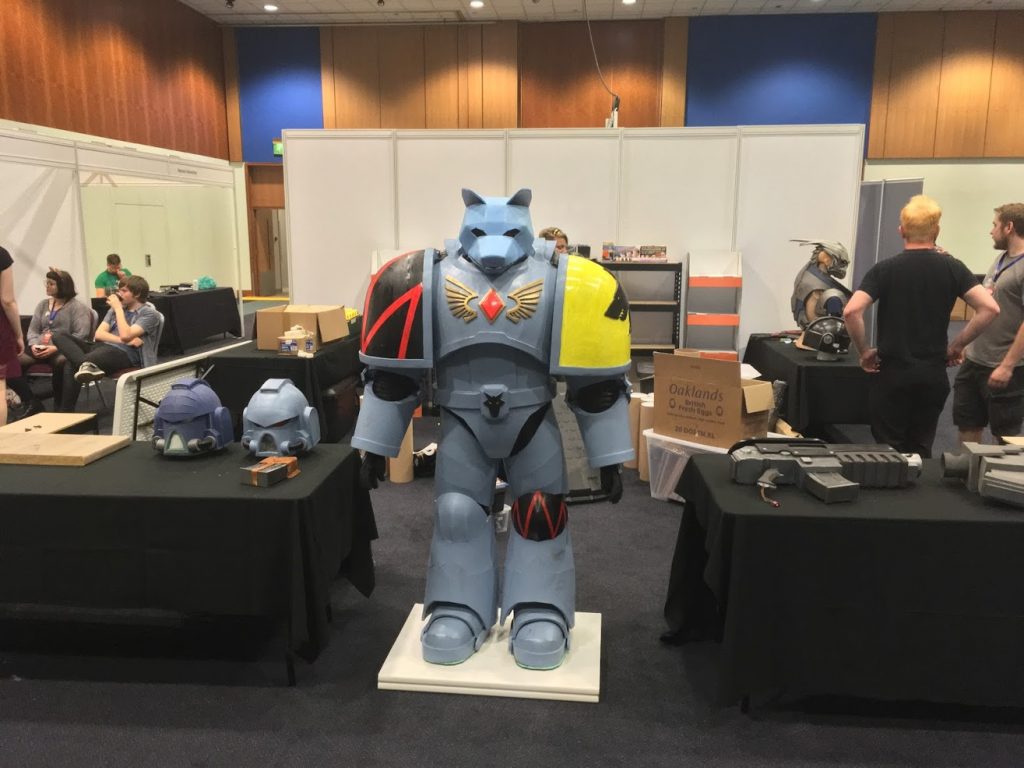 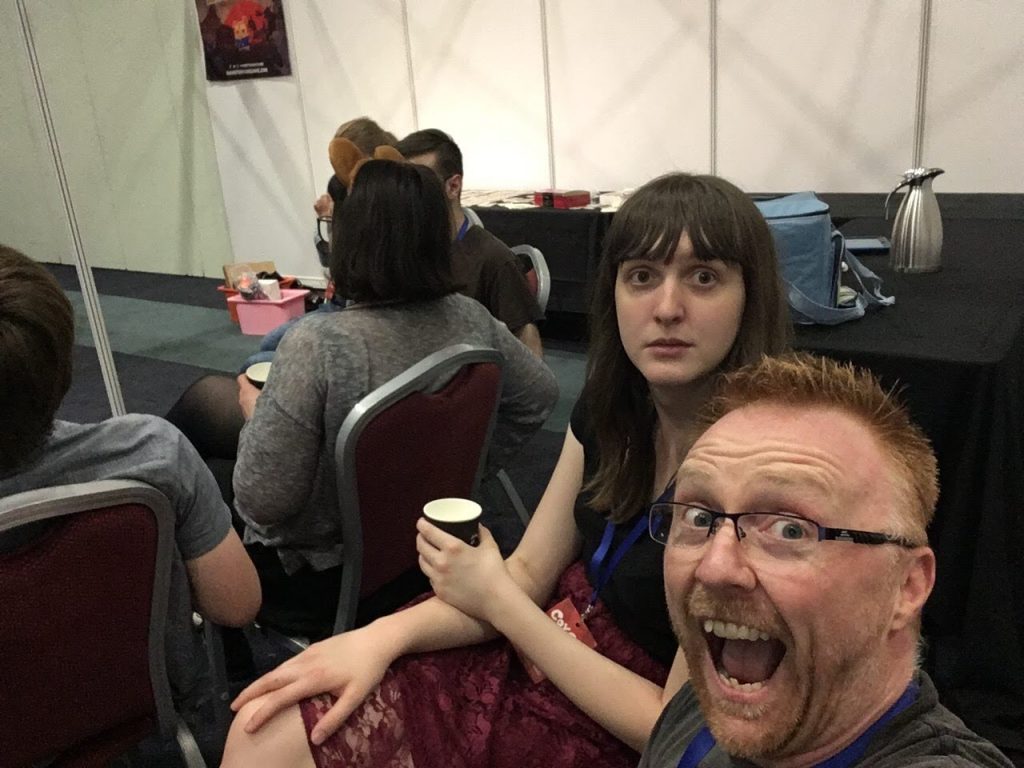 For those of you that have watched Scary Game Squad, you will know that there is a running joke of Davis and ducks. Proof that you should never let the internet know your fears. So I was rather darkly amused to find a load of huge ducks around Telford town center. 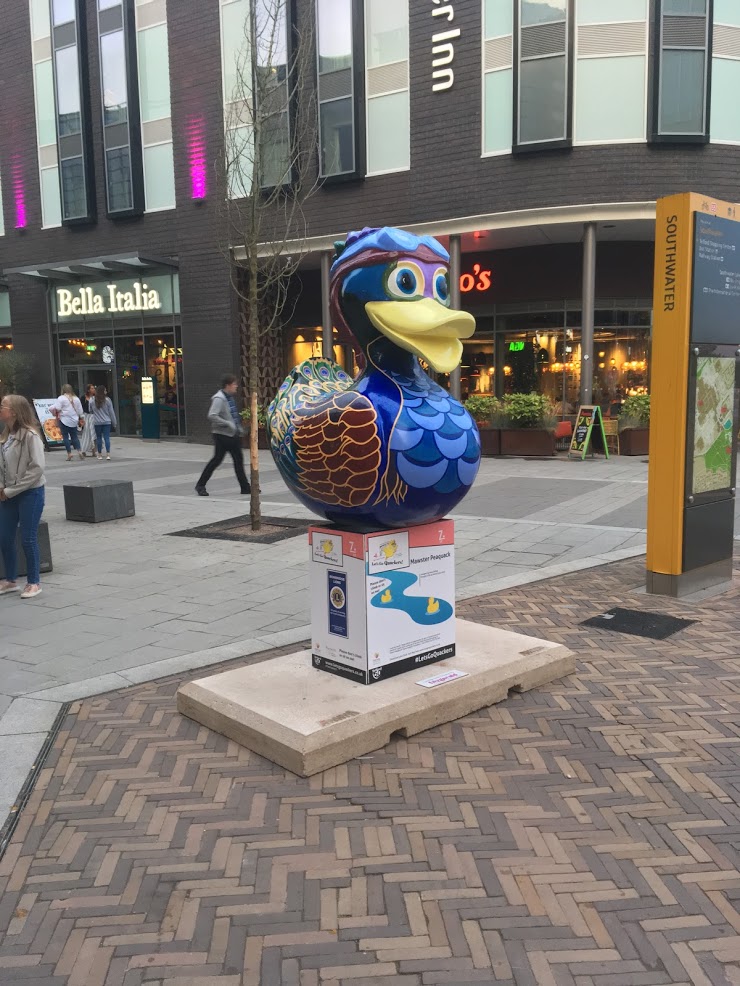 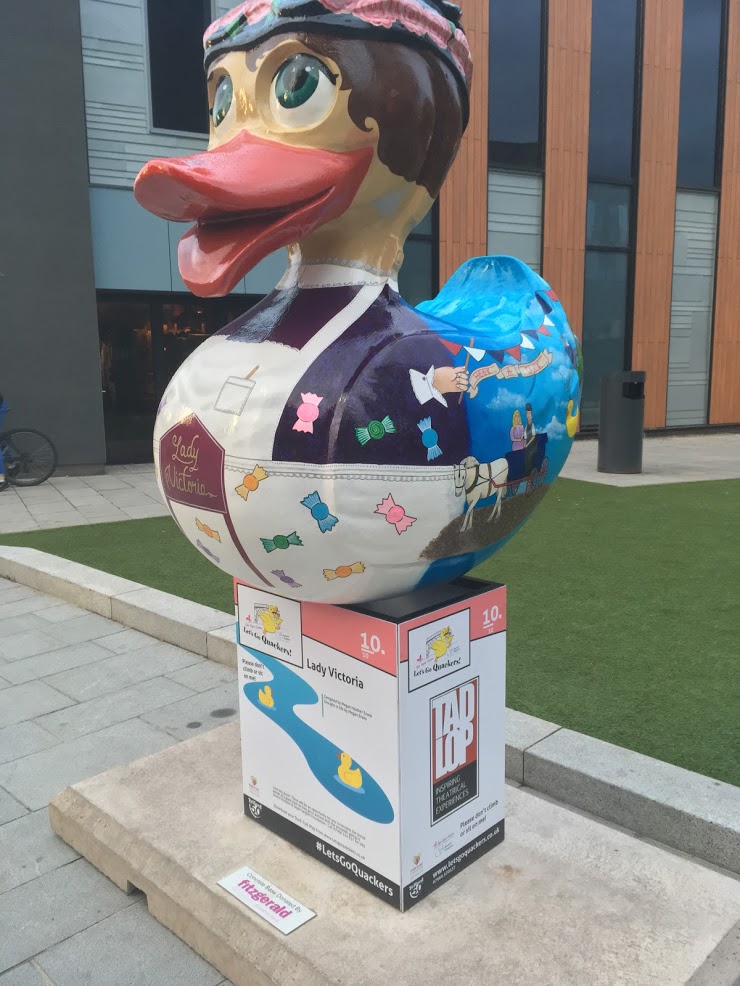 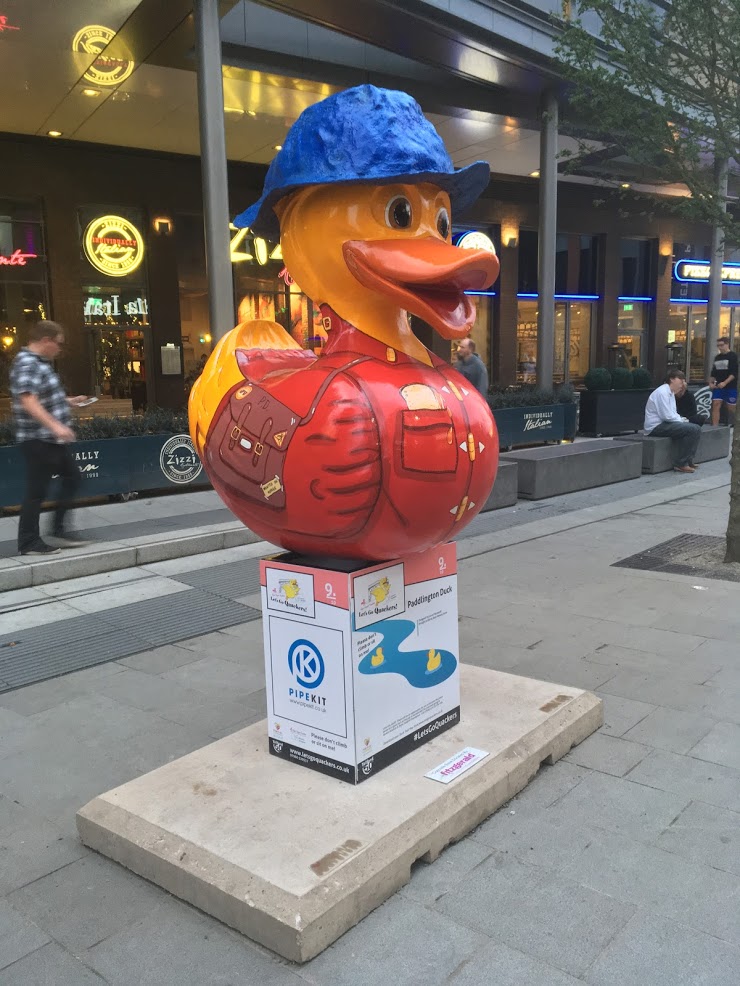 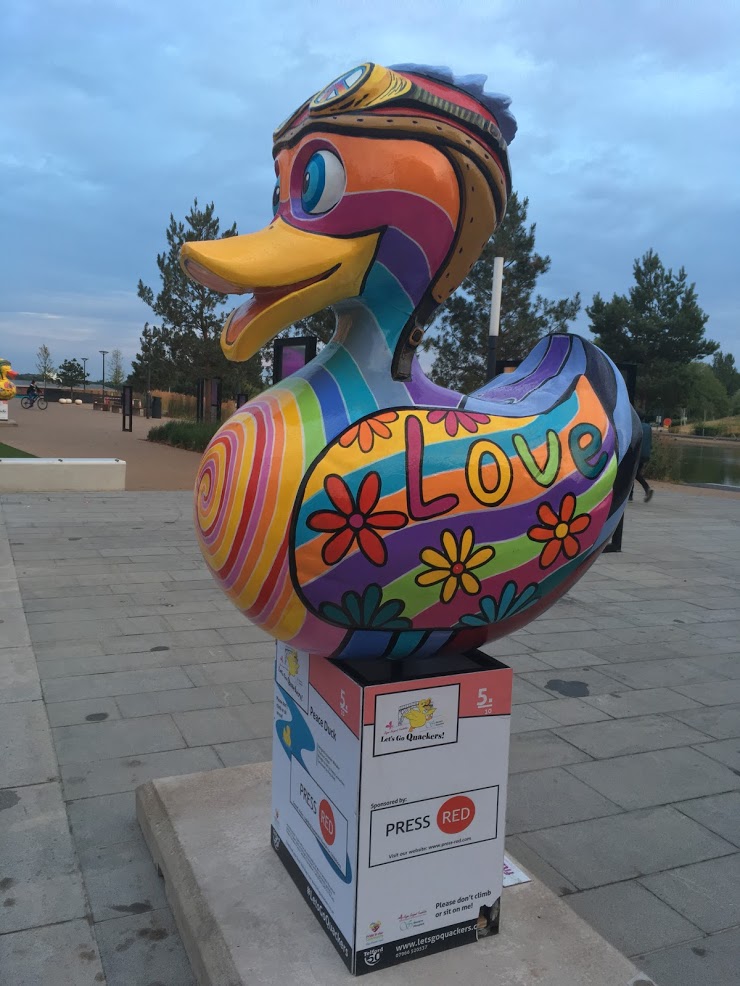 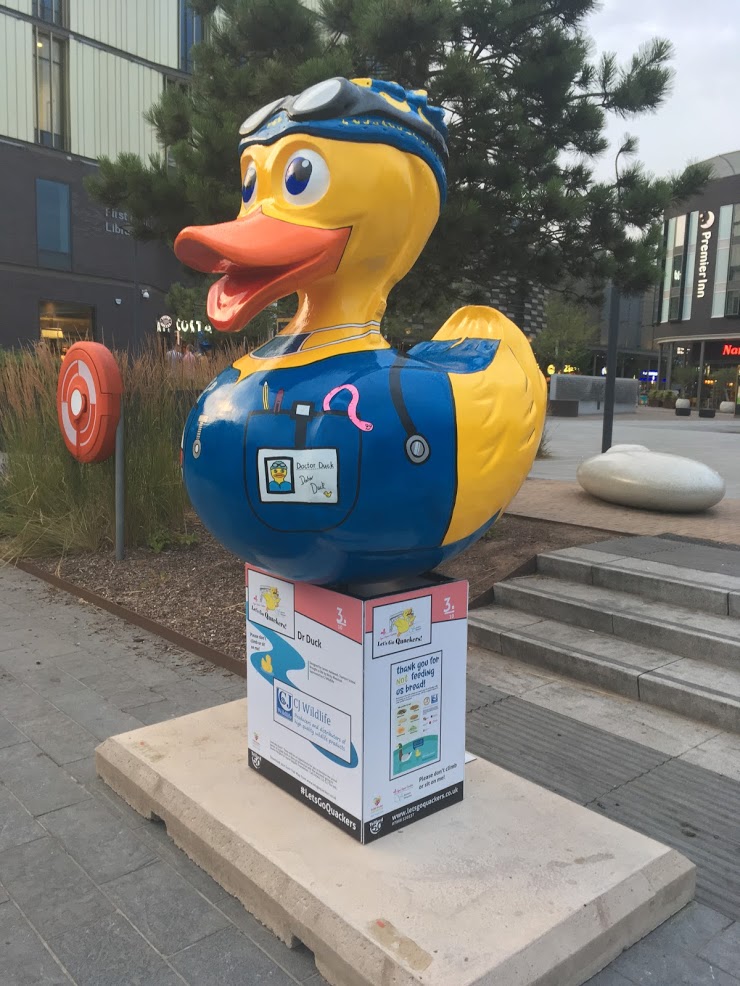 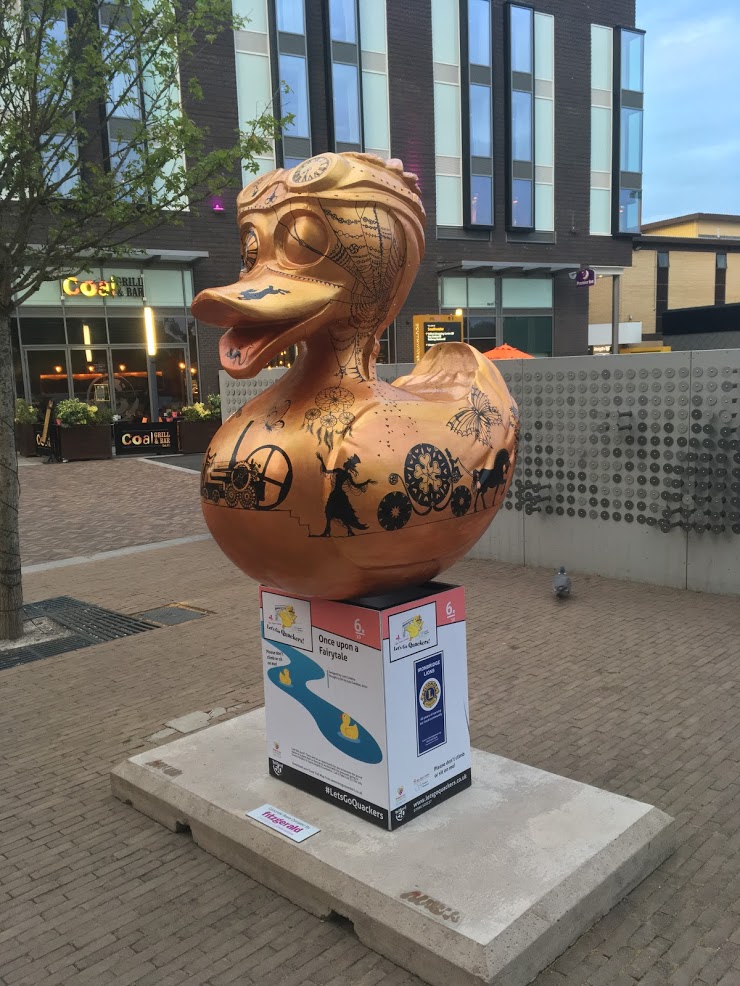 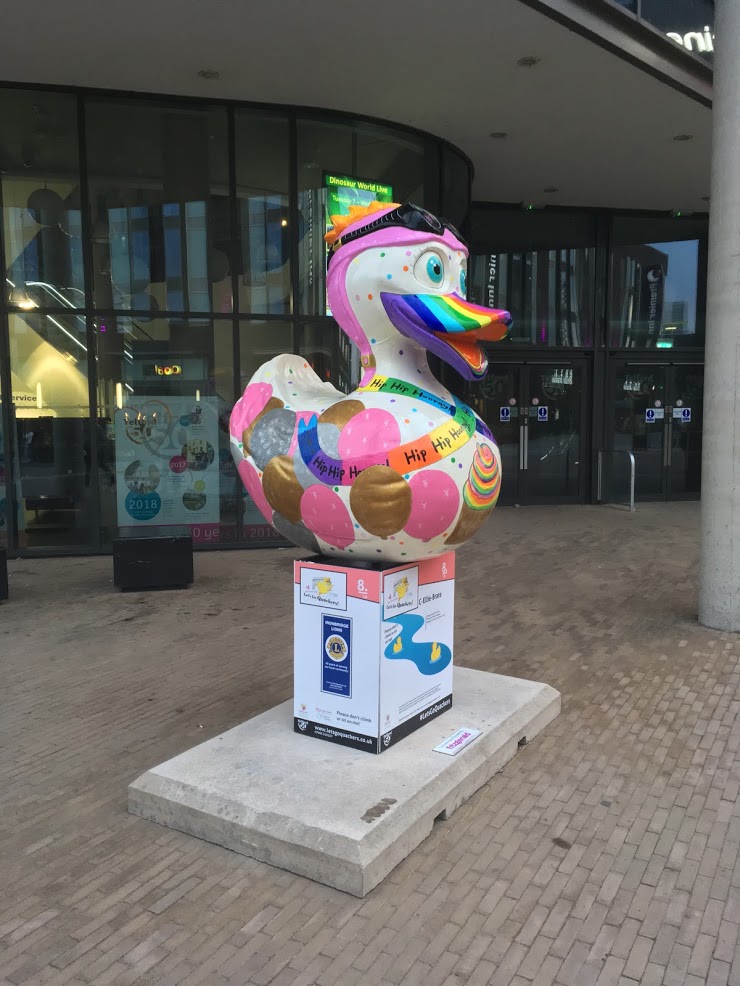 Strewth! Saturday was a bast. I’m serious when I say I was having too much fun to take photos. In hind sight, I wish I had. I have some fond memories of Saturday that I would like to have commemorated with a photo or two. But the very nature of the CoxCon experience is one of joy. So I was on The Cosplay Forge booth. “Tiny”, my 40K space marine was front and center. And I was genuinely blown away at the response to this madness that I spent several years making. The number of people that came along and chatted. Held the Bolt Gun. Tried on the MKVII Aquila helmet. Saw the difference between the first foam helmet and number 6. The people that asked “Is it OK to take a photo?” You kidding? I’m beyond delighted. And in the evening there was a meal with the gang & friends of Muse games. A great day.

There is an oddly creepy feel to an empty convention hall. I was in early. Excitement for another day had made sleeping as difficult as being a kid again on Christmas eve. 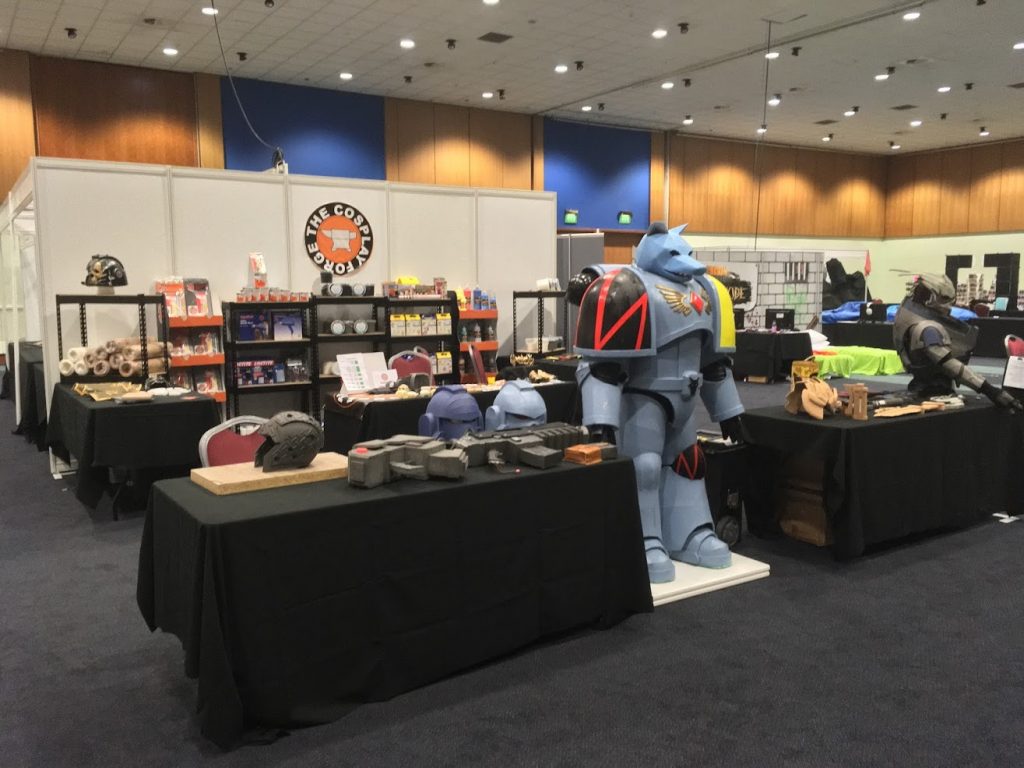 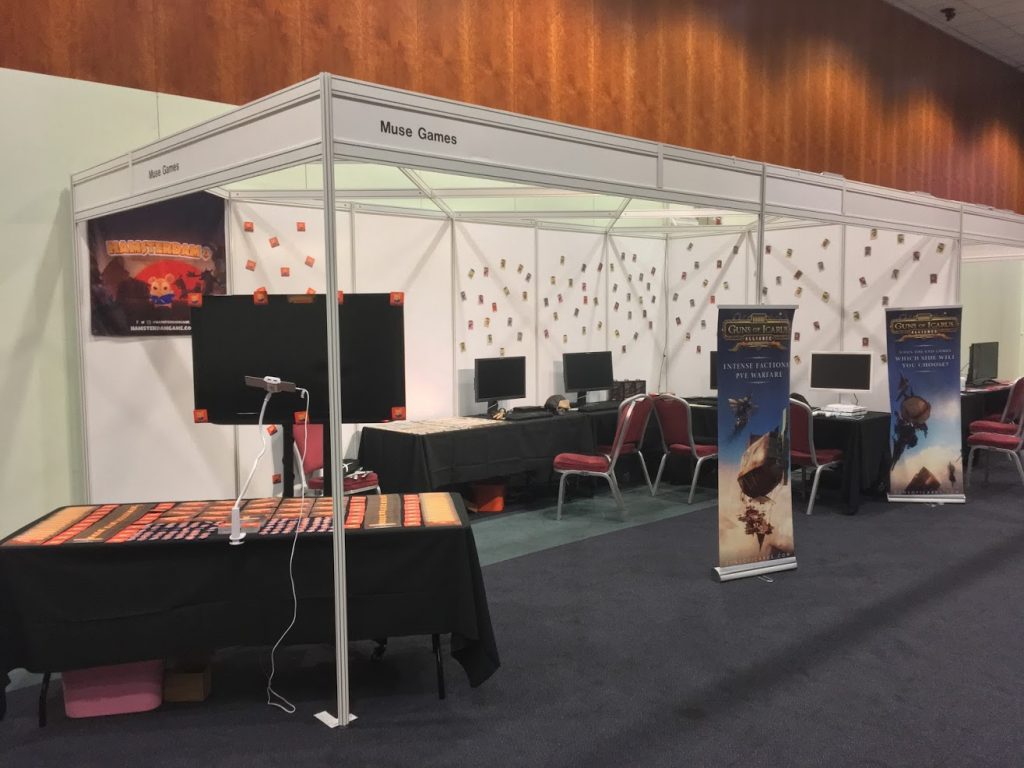 But it wasn’t long before people started turning up. Some a little worse for ware as the result of a lively Saturday night. 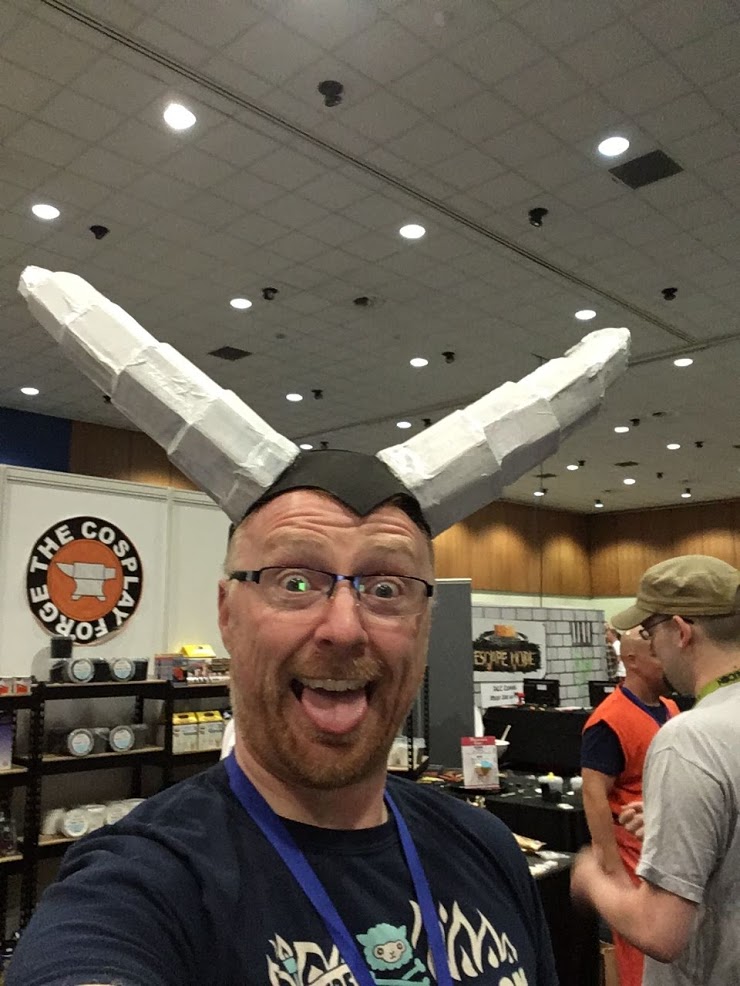 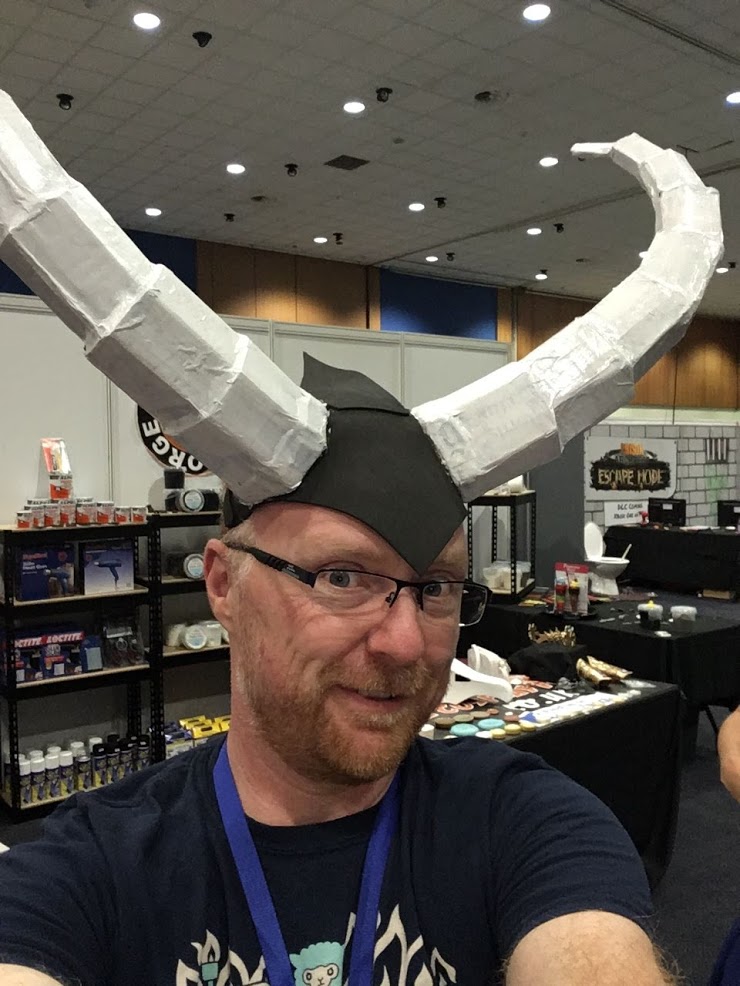 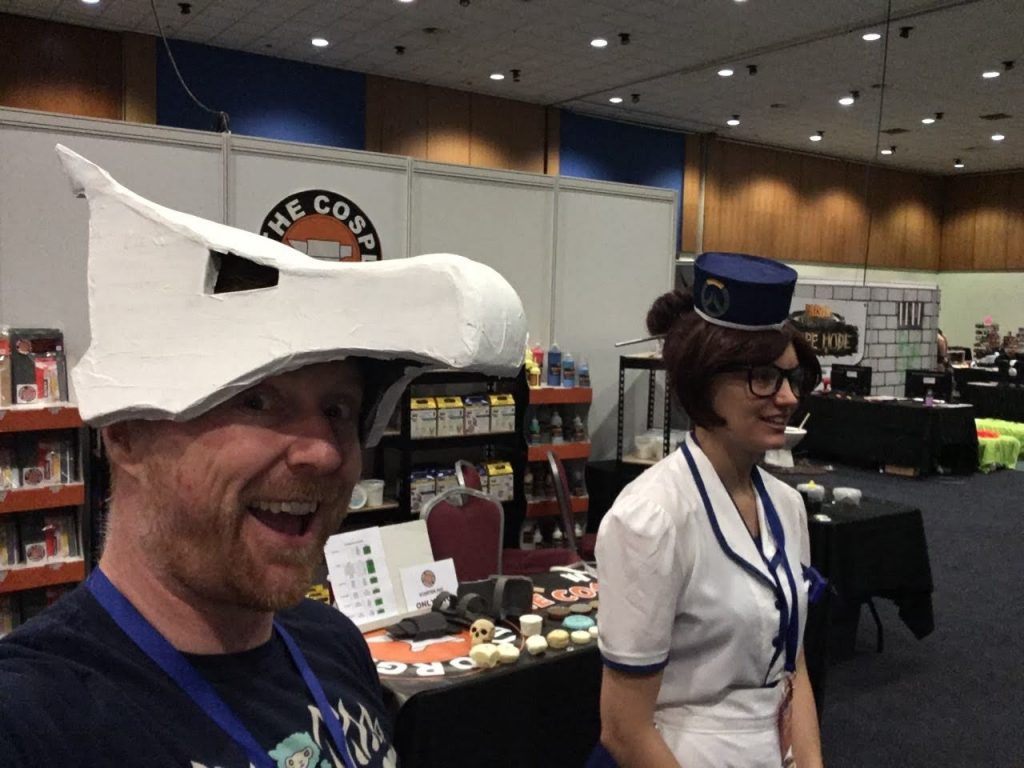 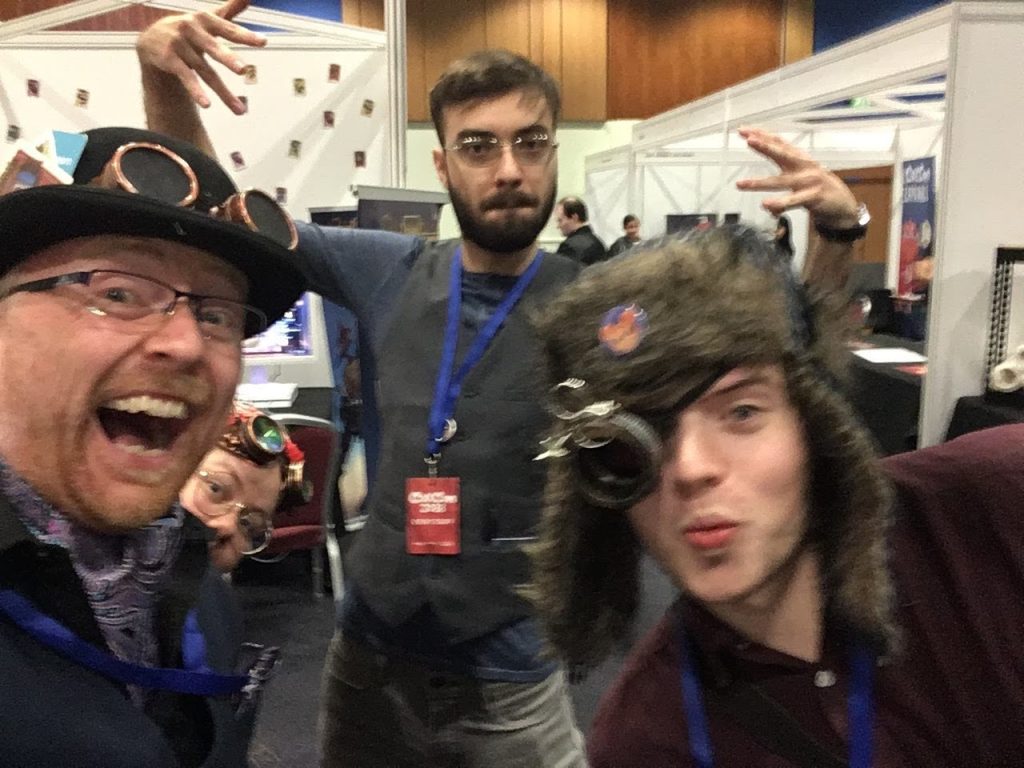 Sunday was another great giggle. I helped out on the Muse games booth. And made new friends. The day before Id’ been passed along a message that someone had asked the guys at The Cosplay Forge if they could try on my Space Wolf. I think any other convention I’d have said no. But there is something about CoxCon. So when they came along on Sunday, I took a bit of time from the Muse booth and dressed a young lad I’d never met before in an outfit I was rather attached to. And not once did I think “This is a huge mistake”. But a warm thought in the back of my mind was one of that just possibly I was making some one’s day. And that is always worth it. Hopefully one day I may get to see all the photos from the event that people took of my cosplay build. The pride I feel as result will spur me on to do more. And that is a very good thing.

And CoxCon 2018 drew to a close. Well the event hall closed just as the last panel began. I helped with the strip & clear down of both Muse Games and The Cosplay Forge booths. Helped people get kit and stock loaded. I got all my kit back into the van. Headed back to the hotel. Had a shower. Got dressed and headed out to the post convention staff party. Oh boy! The friends I made. I was introduced to my first game of “Cards Against Humanity”. Yer – I’ll leave that sentence there thanks all the same 🙂 There was even cheese cake. I was the happiest I’ve been in a very long time. And to the fella that stopped me on the way out that evening to tell me that he liked my positivity, thank you. That was a truly lovely thing to tell anybody. Let alone me.

A recurring theme of CoxCon is the way people speak of the event and the “feel” of the place. One person described it like “A family reunion”, which I think is quite apt. I myself tweeted a reply of “It’s the Jesse Cox effect. We attend and come away better people”

I should never wish my time away. But I’m already looking forward to CoxCon 2019.

I typically sign off these kind of blog posts with a thank you. The list is getting longer. And I can’t help be grateful of that outcome. So once again. Thank you to Muse Games for wonderful opportunity you have presented to me to be able to make people giggle and have fun. Thank you to Wendy and Jose to seeing something in me that I could not. Thank you to Jay for just being one of the most awesome and chilled out people I have ever met. Thank you to the entire crew of The Cosplay Forge, I hope I acquitted myself well on my first cosplay display sort of thing. Thank you to all the new friends that I have made. I do hope you don’t come to regret it. Thank you to all the other unsung heroes that are the volunteer staff of CoxCon. Many thank yous to all of those that attended the convention, came to the booths, said “Hi” and had fun.

And a heartfelt thank you to Mr Jesse Cox. Your hosting this event is amazing. It brings together so many people from all over the world. Lasting friendships and born from existence. And I, for one am very grateful of it.